Two parallel phenomenon have arisen in the US and Mexico over the past four years - a rampant heroin epidemic in the states and a surge in drug cartel violence south of the border. The dual emergence of these have, in the most pitiless sense, abided by a fundamentally logical and predictable chain of events. Market demand is a powerful and unrelenting force, and is capable of consuming everything in its path. When compounded by addiction as its catalyst and filtered through the black market, the results can be tragic and bloody.

The New Yorker ran a brilliant piece of reporting that centered on the explosion of prescription opiate abuse in the 2000s, with a particularly withering focus on how aggressive and unscrupulous marketing on the behalf of Purdue Pharma led to a new generation of opioid addicts. The company engaged in the mercenary practice of telling general practitioners that their Oxycontin painkiller line was safe with minimal potential for abuse, and made billions in revenue as a result. Even though Purdue Pharma was eventually hit with a federal lawsuit in 2007 for lying about Oxy’s addiction potential, an entire industry of opiate pill-pushing swept big pharma in the decade after Oxycontin’s 1996 release. And it had proven ruthlessly profitable every step of the way.

Overdose deaths from painkillers increased nearly 300% in the decade spanning 2001 to 2011. This is how things shake out - the boys at the top get rich, and we have a public health crisis on our hands. Someone buys a yacht, and a generation of newly minted addicts die before their time. And the world turns.

But market behavior is never locally isolated, and repercussions extended far beyond the suburbs and small towns that were overcome by opiate addiction. There was a broad crackdown on painkiller prescriptions spanning from 2011 to 2014, which strangulated the pill inventory on which a whole nation’s worth of addicts relied. Addiction is a remarkably determined beast, and doesn’t tend to get snagged by small impediments like DEA regulations.

When the availability of painkillers was cut, the resultant supply-demand riptide necessitated some form of opiate fill the void. And Mexico’s narcos, being the most ruthless and astute of businessmen, saw what we’d refer to as a “high-value growth opportunity” and immediately began pumping heroin into America’s collective veins. Our corporate class frequently refer to “brand loyalty” when it comes to consumer goods, and nothing insures a more reliable form of buyer consistency than drug addiction.

There are a set roster of factors that determine the cost of narcotics, some of which are distinct to them as a black market commodity. The cost of production is a baseline one, but it’s the most superficial in terms of negotiating the amount at which drugs retail on the street. The actuarial calculus that goes into tallying cost of transport, price of evading law enforcement, and the risk of getting busted can all jostle street value to a surprisingly high sum. And then there’s the more mercenary consideration of how much your customers are willing to pay. If there’s a lack of availability, or a supply chain bottleneck, you can charge desperate customers a remarkable sum for a small quantity of product.

The last of those factors wreaked havoc on the market value of opiate pain pills during the 2012-2014 crackdown. Branded and industrially-produced pharmaceuticals like Oxycontin and Vicodin ratcheted up in price, often far beyond what most addicts could reasonably afford. Heroin, on the other hand, wasn’t tied to the regulatory constraints that regiment both the availability and narcotic potency of prescription opiates. It was far more potent, and much, much cheaper. Oxycontin can reportedly sell for $80 per pill on the streets, while a bag of heroin can go for less than $10. In terms of value per dollar, the bag of powder had become the obvious - if not inevitable - choice.

People will do rather extreme things to keep their supply of contraband in check, but little consideration is granted to the blood spilled in the process. The fatal consequence of an upswing in demand for a black market product is that it energizes, in the darkest sense, the channels through which it flows. Considering they’re hidden from the law and inevitably controlled by criminal elements, black market supply chains are by definition secured under violence. This has brutal side effects, and I’m not solely speaking of America’s first-world addicts in this case.

Between 2007 and 2011, the estimated number of Americans who consumed heroin on a monthly basis rose from 161,000 to 335,000, more than doubling in a four-year span. U.S. authorities seized 2,162 kilos of heroin along the border in 2014, an increase in nearly 500% from the 367 kilos swept up in 2007. The demand for heroin in the States has become so fierce that cartels have taken to planting opium fields of their own to abridge the supply chain, a change in course from relying on the traditional producers in Afghanistan and Thailand. According to the DEA’s 2014 National Drug Threat Assessment, Mexico now produces nearly half of the heroin consumed in America, a rise from 37% in 2008. 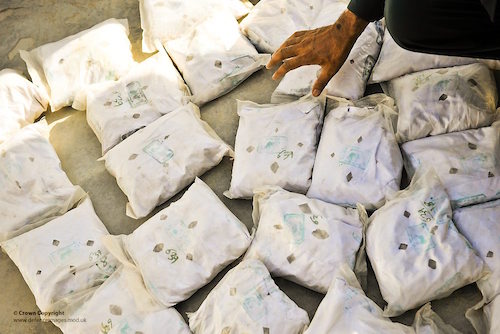 There’s that old mainstay in chaos theory about how a butterfly beating its wings in Ontario can somehow inaugurate a raging typhoon in Singapore. In the machinations of human systems, the chain from action to consequence is rarely that explosive. It’s typically more subtle and insidious. The grinning avarice of pharma execs and their enablers has fueled the harrowing grind of narco murder, and only the multi-step partition between causation and impact has obscured culpability.

Starting in 2012, the province of Guerrero became Mexico’s most violent state. This coincided with the American crackdown on opioid pharmaceuticals, as well as the surge in newfound opium farms in the region and corresponding skirmishes over territory and supply routes. Guerrero was abruptly crowned the opium capital of Mexico, and its coronation unleashed a wave of narco-insurgency throughout the entire province. The fierce battles for territory in Guerrero and the collateral violence that followed have forced villagers to flee their homes en masse. As an overview, an estimated 140,000 Mexican nationals have become refugees since 2007 on account of the cartel wars. And this figure only pays recognition to those left alive.

I don’t write on domestic politics for a variety of reasons - chief among them being that I find election hustling to be a vulgar and nihilistic enterprise. Exploiting your constituents’ ignorance and worst impulses can be an incredibly powerful method for securing their votes, or at least their rapt attention. Donald Trump’s bloviating that Mexican immigrants bring crime and commit mass rape is not just “offensive” in the superficial sense, it’s also fundamentally ugly and sick. It’s sick in part because it’s ignorant of causation and impact, in that both America’s appetite for drugs and dysfunctional drug policies lead to crime and death in Mexico. It’s also sick because Mexico’s migrants often flee conditions that are caused by factors that propagate north of the border. Well over 150,000 Mexicans have been killed in the wake of cartel violence since 2006, and there’s little open talk over here about what’s fueling the ongoing massacre and refugee crisis. Those criminal, rapist subhumans are not our concern, after all. So just look the other way.

Header photo of a Kurdish YPG guerilla, taken in the Rojava autonomous region. In terms of battlefield arithmetic, something…

Waltz With the Devil

Animation is one of the most effective, if not starkly beautiful, mediums for conveying the impact of memory. Recollection…