Animation is one of the most effective, if not starkly beautiful, mediums for conveying the impact of memory. Recollection is deeply complex, and can be tinged by a need to reconcile the past. Ari Folman’s Waltz With Bashir, a visual memoir of his time as a teenage IDF recruit during the 1982 Lebanon War, is ostensibly a war narrative. It’s also a meditation on coming of age, the perennial need for boys to call themselves men, and the moral vortex that can emerge from the compounding of violence with fear. And it is deeply, unapologetically humane.

One of the most damning paradoxes of war, one that’s neglected in the jaded calculus of lives lost and territory gained that fills history books, is that it shoves very young men into being heralds of the end of life - either of others or their own. In the more romanticized, swaggering portrayals of war there’s frequently this dishonest message that war turns boys into men. When you strip away the jingoism and boilerplate machismo, war is more likely to turn boys into ghosts.

There’s that old refrain that war “doesn’t determine who’s right, but who’s left”. And Waltz with Bashir is focused on how these boy-ghosts carry on once they’ve put away their fatigues and bandoliers. It’s the process of reckoning with the past and their exposure to mass violence that painstakingly defines their emergence into adulthood. Manhood, as Ari Folman and his compatriots discover, is about unwinding the shock of their young adulthood and viewing it with the dispassionate acceptance born of time and distance.

Waltz’s visual style is frequently hallucinatory, and splices jarring images of war with interludes that are alternately surreal, disturbing, or oddly soothing. The emergence of Israeli soldiers from the ocean near Beirut as flares rocket above the city is dreamlike and detached, and a later sequence with a troop of young men dodging sniper fire mixes raw panic with an interlude of inexplicable grace. The film even opens with Folman’s dream of being chased by a pack of ravenous hounds - one for each of the dogs he was commanded to shoot during a nighttime recon mission so as to prevent them from barking and raising alarm.

It’s one of the film’s deepest assets, and why it succeeds so thoroughly in conveying the aftershocks of war and the senseless violence that induce them. Shock and guilt don’t exist merely in the moment - they bleed into the subconscious mind in ways that permeate every experience afterward, warping the very fabric of memory into current experience like a poisoned psychedelic. Violence and trauma, especially of a grand scale, are deeply and irrevocably impressionistic.

Without sounding too pretentious, Waltz with Bashir is in part a descendent of Pablo Picasso’s Guernica. There's often a tendency to valorize combat, itself a product of the need to make justifiable and righteous what is often an abrupt and horrifying experience. War, as many writers have noted, is frequently periods of boredom punctuated by incidents of sudden, antic violence, followed by the grueling process of taking stock of loss and cleaning up the aftermath. It’s a pattern that causes the mind to consume itself, producing a jarred and frantic perception of reality that scrambles between numbness and denial coupled with breaks into a terrifying sort of hyper-awareness. There’s no sane way to bridge the abyss between these conflicting states, so any emotional reconciliation between the two is often built from personal metaphor.

And the narratives that Walt with Bashir weaves are all deeply personal. Ari Folman and his compatriots are varying shades of insecure, angry, and afraid, states of mind that sink their tendrils into the active anticipation and experience of war. One of Folman’s peers, Carmi Can'an, is encountered as an adult with a brilliant career as a lauded physicist living in the Netherlands. As a youth he’s shown as a virginal, cerebral kid. He’s short, slight, and nerdy, top of his class but deeply unsure around girls. His enlisting in the IDF is a classic attempt to prove a virility that he felt was diminished by his time in front of textbooks. Women might not want a mathematician, but they might very well want a soldier.

Carmi Can'an recalls a send-off for his battalion where his fellow soldiers are out on a makeshift party boat drinking themselves into a stupor, howling into the night and emptying their dinner over the side of the boat. Never one to hold his liquor, Can’an stares moodily over the side of the vessel away from the festivities and imagines a beautiful woman nearly the size of his boat floating serene across the waters in the near distance. In his reverie he envisions her climbing the deck to take him with her, and he falls asleep between her thighs like a small child as she drifts harmlessly away from the fireworks and beer bottles shattering against the deck.

Ari Folman’s flights into fantasy are similar acts of wish fulfillment. His brief tenures away from military service are spent slumming around Tel Aviv, drinking and brooding on the girlfriend who dumped him before he went off to war. In his darkest - not to mention drunkest - moments he finds himself wishing she’d become consumed by regret if he ever ends up getting shipped home wrapped in an Israeli flag. Folman eventually sees his ex swaying in a disco club, and finds himself unable to approach her. He hopes she also saw him in that moment, fantasizing that she's too overwhelmed by guilt to even acknowledge his presence. Folman and his compatriots are just boys who like girls and want to get laid, all the while stuck in the age-old unease of not knowing exactly what to do about it. And in the midst of this, you throw in mortar fire and the shrieking fear of death.

Here’s the damning aspect of these recollections - the most emotionally resounding are not about combat itself, but are about what happens peripheral to the conflict. There’s a deep, terrible clarity to the scenes of fighting and gunfire. These are the incidents that sear themselves into the mind with pitiless realism, and ultimately cast an eclipse onto the totality of existence beyond the gunfire and the slaughter. They are fixed neatly into a given point in time, with the danger approaching and mercilessly passing at a whiplash pace, never to reoccur. But they still end up playing on repeat as they burrow into the recollection of everything else, and they stain the perception of time and memory. 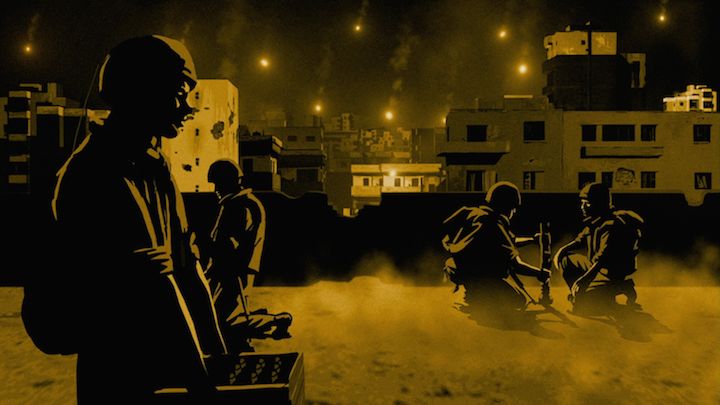 This all culminates in the final scene of the film, where Ari Folman and his regiment of IDF soldiers are in place surrounding a Palestinian refugee camp. Muslim opposition forces had just assassinated the Christian Lebanese leader Bashir Gemayel two days before, and there are growing rumors that Lebanon’s Christians are planning retaliation. Folman watches as Palestinian and Lebanese Shia are shoved into cars and trucks (“like cattle”, in Folman’s words) before the Christian Phalangists drive them into the center of the refugee camp. Without explanation, the nearby IDF soldiers are told to surround the camp and prevent any civilians from leaving. Upon orders from a Lebanese commander, Folman and his fellow Israeli soldiers shoot flares into the sky that ultimately serve as both an alert for the Phalangists to close in, and a noise cover against the screams and pleas as the Christians massacre the entire camp. One of the film's final images is a focus shot of Folman's face, his expression growing numb with awareness as flares plume in the distance like morbid fireworks.

I don’t really touch the Israeli-Palestinian conflict and the various peripheral engagements for a variety of reasons. Primarily because an overwhelming amount of my friends are Jewish and sustain deep, complicated feelings about Israel that range from contempt for Likud’s policies and a burdened sense of guilt for the treatment of Palestine, to a near-militant sense of pride and rage at any besmirching of Israel’s name, itself born from a fierce need to defend Israel in the wake of generations of anti-semitic pogroms, degradation, and genocide. But I take comfort that some of Israel’s best artists are able to appreciate the totality of conflict and the human toll it takes. War poisons everything, and human beings only get better one by one.

America's Pharmaceutical Industry Has Mexico's Blood on Its Hands