One of the guarantees that a film will be granted the moniker of “timeless” is ensuring that it actually skips forward in time. It helps make a film more enjoyable, if not a bit eerie, to watch in retrospect. There aren’t too many films that manage to stake out the immediate future before it unfolds in real-time. This is one of them.

I first watched Ghost in the Shell near the close of an adolescence that was heavy on dystopian fiction. What started with Brave New World and closed with Margaret Atwood’s Oryx and Crake was topped off by a film that promised a softer and more inconclusive vision of societal collapse.

Indebted to Philip K. Dick as much as to Japan’s futurist fiction, the film version of Ghost in the Shell piggybacked off the stateside popularity of 1988’s Akira. That film reached a broader American audience than any previous work of eastern animation, and helped tip off stateside viewers that Japan’s creative output was significantly more complex than the cultural tokenism of Sanrio Ltd. But while Akira was apocalyptic and bloody, Ghost in the Shell was restrained and cerebral, with even its more kinetic scenes immersed in the anodyne hum of near-future Tokyo.

My apprehension with the upcoming mass-market Scarlett Johansson remake of Ghost in the Shell is that it will keep the objectification of its main character while tossing out all philosophical heft. The film's name is itself a nod to the Cartesian musings on the relation, or separation, between intelligence and the physical body. And it would be a shame if the film became an ersatz The Matrix (which was inspired by Ghost in the Shell) considering how much the original movie has to say.

One of the lasting triumphs of Ghost in the Shell, and cyberpunk in general, was the eschewing of digital utopianism. Plenty of timelines offered a more transformative vision of digital connectivity and human augmentation, one that promised new technology would supplement perennial human scourges. But the victories of modern computing and the internet lie in creating more sophisticated systems of communication and analysis. They’ve made our tools more refined, but they haven’t erased human flaws.

My favorite sequence in the film is completely bereft of dialogue, and shows a flooded Tokyo overrun with urban disrepair despite its ostensible leap into the future:

It’s a wordless argument that digital sophistication is incapable of addressing both resource deprivation and social decay.

It’s also telling that the film's technology is frequently applied for the most mercenary ends - namely terrorism and political sabotage. One of the premier utilities of digital transference is the ability to breach national and organizational boundaries that would be unimaginable in the physical form. It opens the playing field for rogue elements to wreak disproportionate havoc - or broadcast a disproportionately loud message - considering their actual power and numbers. (Two notorious examples from last year being the Sony Pictures hack and ISIS's self-mythologizing on social media.) Ghost in the Shell made physical manifestation of this - malicious hackers could subjugate the free will of humans with cybernetic implants. Even before the broad adoption of the commercial internet, this was a knowing metaphor for the digital sphere’s power over our collective psyche.

What remains, however, is that our psychological limitations were not overcome with the advent of the digital era. They remain inevitably intertwined - the unfolding of global connectivity is not a transcendent exercise, but rather one that allows human idiosyncrasies to take novel forms. This remains true whether it involves scoring drugs or broad-scale attempts to intimidate. In the world of Ghost in the Shell these tendencies are only compounded when you throw transhumanism into the mix.

At its core, Ghost in the Shell is a movie about what it means to be human as much as what happens when humans get in way over their heads. It's long been remarked that one of the defining consequences of human evolution is that we became far more clever than wise - we're adept at novel manipulation of our environment, but much less inclined to consider the long-term consequences of our actions. Above and beyond any other specie, we've replaced the old Darwinian paradigm of painstaking generational adaptation with reflexive alteration of our surroundings. We no longer adapt to our environment; our environment is constantly shaped to suit us. Films like Ghost in the Shell and Blade Runner show the inevitable endpoint of this, where we create machine intelligences that are freed from organic confines altogether, or we augment our bodies in real-time. 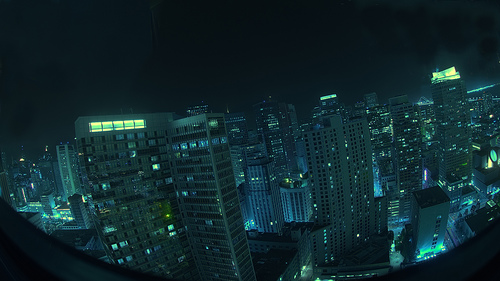 And this is where Ghost in the Shell comes into play as a subtle apocalypse narrative. It's not apocalyptic in the eschatological sense, one where the entire human enterprise burns alive in some end-times cataclysm. That's a Biblical fixation, one that's indebted to a phase in human development where we were terrified of the forces of nature and easily stupefied by simple phenomena like diseases and lunar eclipses. Ghost in the Shell portends humanity's inability to improve itself beyond technological means, one where we're plagued simultaneously by overpopulation and abuses of sophisticated technology. It manages to echo the quote, attributed frequently to Carl Sagan (among others), that humanity will either die out within the next 500 years or live forever. And whether or not we overcome this trial can't be determined by algorithm.

In a subtle way, Ghost in the Shell is a latter-day fable. Not one that's preoccupied with Abrahamic moralizing, but a humanist inculcation to pay mind to our mortal limitations regardless of our technological achievements. Technical cleverness is one thing, but self-awareness and growth in the human spirit are much more elusive. It's similar to David Foster Wallace's remark that "Nuclear weapons and TV have simply intensified the consequences of our tendencies". Our toys can become as sophisticated as we like, but it's no garuantee that we'll mature beyond humankind's infancy.

From Russia, With Four Shots to the Back

Like many casual Putin watchers, Boris Nemtsov wasn't a name I heard regularly. American observers tend to hear about…